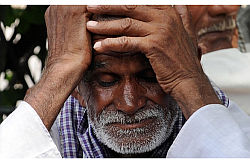 Bundelkhand region is known for its abundance of natural resources but today this is one of the poorest regions of the country. The total amount of current outstanding rural bank debts in Bundelkhand is Rs 4,370.32 crore. This is 21% more than 2010 when the total bank debts stood at Rs 3,613.22 crore. As many as 519 suicides have been reported from the seven districts of the parched and extremely backward region in the five months of this year. In the year 2009, 568 farmers and in 2010, 583 farmers have committed suicide due to various reasons in Bundelkhand as per official records. Taking suo moto action on the reports of farmer's suicide and distress in Bundelkhand region, Allahabad High Court tasked Uttar Pradesh and Central Government to submit report. Since 2002, three years have been declared drought-affected: in 2002, 2004 and 2009. Bundelkhand region covers seven districts of Uttar Pradesh (Banda, Chitrakoot, Hamirpur, Jalaun, Jhansi, Lalipur and Mahoba) and six districts of Madhya Pradesh (Chhatarpur, Damoh, Datia, Panna, Sagar and Tikamgarh). Rivers like Ken, Betwa, Yamuna, Mandakini and many other seasonal rivers flow through Bundelkhand but the area is yet rain fed.

The indebtedness: The indebtedness among farmers can be understood by the official records that total amount of current outstanding bank debts in Bundelkhand is Rs 4,370.32 crore. This is 21% more than 2010 when the total bank debts stood at Rs 3,613.22 crore. In four of the worst affected districts- Banda, Hamirpur, Lalitpur and Jhansi, farmers owe banks about Rs. 2750 crores. Siddiqui (2011) revealed the fact that total loan outstanding of Rs. 1791 crore is only on the farmers of Chitrakoot Dham Karwi commissionaire.

A Study conducted by Gokhale Institute of Politics and Economics, Pune reveal that rural indebtedness is acting only as a "trigger" for a complex range of socio-economic factors that lead to suicides. Analysis of 30 farmer suicide cases revealed that among small farmers while 36.37% committed suicide "due to loss of agricultural income and indebtedness", in case of medium farmer, this factor amounted to 25% of suicides and in case of large farmers, only 14.29%. Study reveals that while crop failure and indebtedness were primarily responsible for suicides among small farmers, in the case of medium and large farmers serious family crisis, drinking and gambling habits and chronic illness or old age led to suicides. The element of self-respect is very strong in Vidarbha and often results in farmers taking drastic steps to maintain their dignity. (Vaidya 2006). The study indicated that given a choice, 40% of farmers would want to quit agriculture and take up some other career. The SAS data and its analysis indicated that the increased cost of cultivation and the sharp deceleration in the growth of prices of many agricultural commodities were among factors that had led to high indebtedness among farmers, 42% of the farmers borrowed from money-lenders.

Financial assistance: The Union Cabinet approved Rs 7,277 crore Drought Mitigation Special Package for the integrated development of the drought-hit Bundelkhand region in Uttar Pradesh and Madhya Pradesh from 2009 to 2010. Under the package, the main strategy is optimisation of water resources through rainwater harvesting and proper utilisation of the river systems. Laying stress on agriculture, central to the country's growth, the Finance Minister announced a slew of measures, including Rs.1 lakh crore more farm credit at subsidised rates, removal of production and distribution bottlenecks in food items, and a second green revolution in the east. "Agriculture development is central to our growth strategy. Measures taken during the current year have started attracting private investment in agriculture and agro processing activities, this process has to be deepened further," said Finance Minister Pranab Mukherjee while presenting the 2011-12 budget in the Lok Sabha.

To boost the growth of farm sector, the government has raised the target of credit flow to farmers to Rs.4.75 lakh crore in fiscal 2011-12 as against Rs.3.75 lakh crore in the current financial year, he said. Banks have been asked to step up direct lending for agriculture and credit to small and marginal farmers, Mukherjee said. The farm credits will be heavily subsidised and the rate of interest will be 4 percent per annum. The government is providing subsidised credit to farmers under interest subvention scheme. Under this, short term crop loans are given to farmers at an annual interest rate of 7 percent. In the current financial year the government is providing additional 2 percent interest subvention to those farmers who repay their crop loans on time.