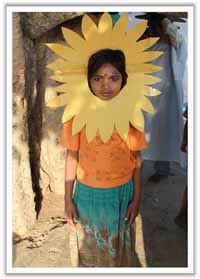 In Bundelkhand region 100 years back, Bargarh was known as tribal area situated in between the dense forest. The tribal’s health level is known to be good in those days and the tapping of the minerals is supposed to be very less in those days.

Dryness is the main disaster of this area. Here a day’s some tribal communities from past 10 years are successful to do agriculture based livelihood activities based on rain water. But lack of rain as usual nowadays wells, ponds of the villages are dried and this is not a natural means somehow the communities is responsible for that type of condition.
It’s not a saying if we analyze that from 1947 to 1982 government is merely involved in chaffering of the trees. Till now days trees that has been surviving is also chopping down by the collusion of forest mafia and forest department.

In that area there is village name Chittaini (Bargarh-Block-Mau). The initiative taken by the children of the village is to educate the people about the importance of WATER, FOREST & LAND by the medium of Street Play.

The children want that there is water in their ponds and they also want tree on their barren hills.

To spread their message to the society they organized a street play in the village with a allowance rally to sensitized the masses. 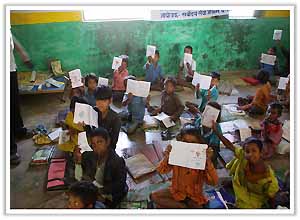 Drawing Campaign: We started the awareness campaigns on natural resource management by the children. With the 4 to 9 year olds, we made a one week long drawing campaign on themes such as flowers, trees, family, animals and Gods.

Street Play : With the 10 to 15 year olds we prepared a street play based on a traditional myth from the Kena Upanishad.

The myth features Uma, the Goddess of Nature and her relation to different elements, Agni (fire), Vayu (air) and Indra (water).

The community greatly enjoyed the play and so did the children. They have already asked for a new one!