(Article) The wretched of the earth : Bundelkhand

The wretched of the earth 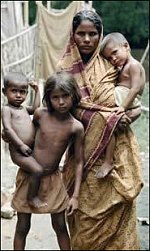 Bundelkhand's arid and backward status is not new; on the contrary, it has become a parched blind spot in our collective consciousness. But while chronically drought-prone, the region has seen acute rainfall deficiency in the last five years, even as irrigation coverage has remained largely stagnant, leading to declining yields Comprising 13 contiguous districts, six of them in north Madhya Pradesh and seven in south-west Uttar Pradesh
, the once prosperous Bundelkhand was a significant source of the region's wheat supply. "Warmer winters and a shortened monsoon have led to a drastic reduction in the yield," says Sachin Jain, an activist with Vikas Samvad, a grassroots organisation allied with the Right To Food campaign.

And it isn't only agriculture that has suffered. In Dheemarpura village, 30 km from the district headquarters of Tikamgarh (MP), the drying up of the Sindhu Sagar Lake has led to a complete collapse of the economy of the village, composed primarily of the Dheemar caste of fisherfolk. "I had never seen the bed of the lake; it has been here from ancient times," says Sitaram Dheemar who is in his 50s. For the last three years, however, there has been no fishing.

Simultaneously, crippling inflation, particularly in the last few months, has led to a massive reduction in purchasing power, pushing people to the brink of starvation. The social security safety nets that should be the final safeguard against deprivation - chiefly, the National Rural Employment Guarantee Scheme (NREGS), the Mid Day Meal Scheme and the Integrated Child Development Scheme (ICDS) - are heavily compromised by corruption and violations, leading to serious doubts over whether the recently announced Rs 7,266-crore package for the region will be effective without a fundamental policy rethink.

Even while farmers across the country all but indenture themselves so that they can hold on to their buffer against starvation, their plot of land, in Bundelkhand, being "landed" is no protection from deprivation.

Ramesh Kumar, a Gond tribal from Barai village in Chhatarpur district (MP), owns a 4.5 acre plot. "This year I had to see Delhi for the first time," he says. After the failed monsoon, he, just as the landless of the village, went to work on a construction site in the capital. "Earlier, I got 24 quintals of wheat per harvest of which I kept six to seven quintals to feed my family. For the last three years, since the drought took hold, I've been getting only seven to eight quintals totally and a price of Rs 700 per quintal. With an input cost of Rs 12,000, I couldn't cover my costs and had to take a loan from the money-lender. This year, I'm growing chana but I can't keep any of it for my own family," he says.  [..]

Read the rest of this article..
Courtesy: Timesofindia.indiatimes.com

Solution between poor goverment and promtion of community effort

Permalink Submitted by abhimayu singh on Wed, 2009-12-23 04:10.
Very Good Artical But prevantion of Infant death practces is not see. Now In Bundelkhand (UP&MP) bad condition of goverment support marganalized family How Can Sarvived and save his infant with good health and doing work for good Governace ? We Sugest to Athur see and give idea for sustaibilty to good behaviour whear Some good Practces are runing by tribal women in Bundelkhand . Impact is Infant death malnutration are under Melenium Goal. Place Name BARGHAR Blok Mou Dis Chitrakoot Womwn orgnization Name Is MHILA SANTI SENA