What does it say about the rest of India when Congress vice-president Rahul Gandhi's pet project is reeling under corruption? Fake bills, inflated estimates, non-transparent contracts and sub-standard works have turned the Rs.7,466-crore Bundelkhand economic package into the latest multi-crore scam.

A major portion of this package was earmarked for harvesting rainwater and for irrigation schemes. Since the region's agriculture is mostly rain-fed, the thrust was on conserving water. The rest of the amount was

earmarked for various activities, including animal husbandry and forestry; around 20 per cent of the region is under forest cover.

Shrikant Dixit of Bharat Jan Vikas, an NGO, alleges that in North Panna forest division alone Rs.6 crore was swindled by forest department officials who claim to have dug more than 90 tanks and percolation ponds. They presented 8,500 fake wage vouchers in the names of dead people. For instance, Gouribai of Sunhara village died in 2008, yet she is listed as a labourer, and there are records of wages paid.

The officials also presented fake bills for hiring tractors and earthmovers. An example is Ramesh Awasthi, who presented five fake registration numbers of earthmovers with bills for the work done by them. Of these numbers, MP 16 MB 2905 is actually that of a Scooty Pep owned by Keerti Raikwar of Chhatarpur, and used by her daughter Neetu Kashyap, who is a transgender movie actor. In Awasthi's bill, the scooter transgendered into a tractor owned by him and was used for digging a percolation tank in beat number P-399. The bill was for Rs.44 lakh.

The second vehicle, MP 16 MB 7892, is Awasthi's own Bajaj motorcycle. In the bill it was shown as a tractor owned by Vikram Gond, a tribal, to whom Rs.72,505 was paid for work done in beat number P-408. Vikram does not own any vehicle. The third earthmover, MP 16 B 2904, is a Scooty owned by Yogendra Singh. The remaining two numbers are of motorcycles registered to an Ashwini Awasthi.

In some instances, the names of vehicle owners appear as labourers also. For digging percolation pits No. 7 and No. 8, in beat number P-445, an earthmover owned by Sahdev Tiwari was used, and a bill for Rs.5 lakh was submitted. During the same period, Sahdev is shown as a labourer at beat number P-427 and P-444. As per records, he was paid Rs.2,898 for 21 days @ Rs.138 a day. Rakesh Gupta of Chandranagar is mentioned as owner of an earthmover, and was paid Rs.1,01,771 for work done from 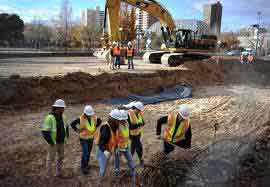 There are outright cases of siphoning, too. Ramlal Gond, a farmer, was shown as a skilled labourer to whom Rs.54,030 was paid. The voucher shows his thumb impression. In a sworn affidavit Ramlal said, “For the last four-five years I have not worked anywhere. And, I am a literate man. Why should I put my thumb impression? Bills in my name are fake.”

Under the Bundelkhand package, in Madhya Pradesh alone, Rs.1,118 crore is being spent on making reservoirs. Activists like Akhilesh Upadhyaya of Bundelkhand Mitra, an NGO, allege that government officials inflated estimates to ensure that contractors can quote higher amounts and slip under the radar of vigilance officials.

Not to mention that the work done is substandard. According to Upadhyaya, in Panna and Damoh districts nearly a dozen dams broke in the first rains, and had to be repaired. In Umehee village, the Rs.25-lakh check dam was supposed to be built with 12mm iron rods, but only 8mm rods were used.

An inspection report of the National Rainfed Area Authority (NRAA) says, “Weirs and stop dams constructed by the Rural Engineering Service of Madhya Pradesh are ill-sited, incomplete, poorly constructed and got damaged during the first flow event of the rainy season. The RES should not implement any more work under the Bundelkhand Package.” The technical experts of NRAA were A.K. Sikka and K.D. Sharma, and the report is available with THE WEEK.