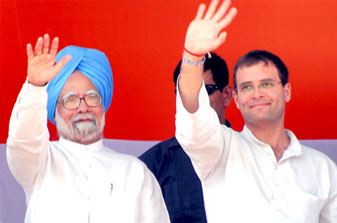 Another summer of crop failure, water crisis, starvation deaths and suicides looms over Bundelkhand, a parched region espoused by Congress leader Rahul Gandhi.
Just 10 days ago, Prime Minister Manmohan Singh and the Gandhi scion had addressed a rally at Banda and announced sops, including a Rs 200- crore drinking water scheme, for the region.

But the over 10,000 villages in the politically important zone of Uttar Pradesh present a very grim picture with the rise in temperature. The situation is not better even in those villages where development has been ostensibly better.

Take the case of Banda's Goira Mugli, the village of state rural development minister Daddu Prasad. There are 400 handpumps and 10 wells for a population of 10,000. But still the people here don't have water to drink, let alone for irrigation. While wells have dried up, 250 handpumps are not working. One can draw only one bucket of water from each of the remaining 150 handpumps.

"The water table has gone down. Last summer, we used to draw two buckets of water in 10 minutes. We fear that next summer there would be no water at all in these pumps," Kallu, a villager, said. "I don't remember the last time when I drank more than five glasses of water in a day," Naeem Khan (40), another villager, said.

The UPA government had approved a Rs 7,266- crore package for the region in 2009 and also additional grants of Rs 1,800 crore in the last two fiscals for UP and MP - the two states under which Bundelkhand falls. However, these measures seem to have yielded little success in alleviating the problems.

Dear Sir
I am also a Bundelkhandi and hails from Chitrakoot. By profession I am a geologist and have visited several countries including the countries of third world like Niger, Zimbabwe, Democratic Republic of Congo.
These countries are known for its poverty, hunger and several other worse situations. International agencies like UNAID, UNDP, UNESCO, UNICEF etc have made them so lazy that they don't want to work and in case of every need they look at those agencies only rather than dealing themselves.
Plus minus same story is with Bundelkhand. The current scenario of Bundelkhand and people of Bundelkhand are waiting for loan waivers, water tankers, continuous food and medical supplies from national or internation agencies. This is unfair. Bundelkhand region of the country which has largest number of NGOs. I am wonder what they are doing. They are ofcourse doing but for themselves. Just taking grants and using them for their own purposes.
It is the time when NGOs can play vital role in reshaping the socio-economic condition of Bundelkhand.