Haze is all one can see beyond 60 metres in Kabrai, a pocket of legal and illegal stone mining in Bundelkhand. The visibility reduces to zero when a stone crusher unit starts working. Green trees have grayed and concrete link roads are padded with an inch-deep layer of dust. Dust particles which get stirred each time a heavy vehicle passes through are a part of the life of people living in the mining 'infested' districts in Bundelkhand area of UP. The nuisance is a clear invitation to silicosis, a major risk factor to tuberculosis (TB). TOI, with the help of The Union fellowship, brings a spot report.

'Dust kills us, it is what we breathe and eat': Vimla Devi owns a farm right opposite Badhwa area of Kabrai in Mahoba. She is so sick of dust that she didn't work in a mine or crushing unit despite getting an offer. "I am happy with my identity as a farmer," she says. But the problem of dust is making her think about migration. "Dust is a huge problem for all of us. It is what we eat and breathe. And we cannot do anything about it. So we 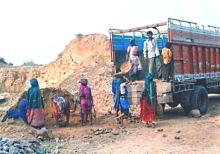 are thinking of going to some other place," she rues. Not just Vimla, those living in the villages around these crushers are tired of the dust. "Dust kills most of us. I know of many people who have died coughing because of dust," says Uma Shankar, former village pradhan of Dharrara Village - a hamlet of around 3000 people living in a place surrounded by some 40 crusher units. Doctors say that it is natural for people surrounded by so much of dust to cough all the time. This has two implications in context of health. "People tend to ignore early signs of TB which is prolonged cough for more than three weeks. Secondly, the dust particles which settle in their lungs make their lungs quite weak. The combined effect is that when a villager goes t o see a doctor, there's hardly any time left for intervention," said a government doctor.

The extent of dust and risk: When the stone is crushed, a substantial percentage of the dust emissions are carried away to the surroundings by wind currents. Dust that settles within the plant gets air borne again due to vehicular movement or by wind and acts as a secondary emission source. The circulating dust is a source of environmental, health and safety problems - an aspect of mining which subsequent governments in UP have ignored. The fact stands proven when one gets to know that the last survey undertaken by UP Pollution Control Board to assess the ills of mining took place in 2002. The survey said that the extent of atmospheric air pollution in Bundelkhand was 1800 micrograms per cubic meters against the permissible limit of 200 micrograms per cubic meter. The decade between 2002 and 2012 has seen an increase in the number of lease granted for mining which suggests that the volume of suspended particulate matter must have gone up. And if the extent of illegal mining was also to be considered, then picture would have been grimmer. The Central Pollution Control Board's Comprehensive Industry Series (COIN) document on stone crushers also states that the work place environment at stone crusher sites contain millions of suspended mineral particles of respirable size that get deposited in lungs following inhalation.

Dust, disease and death: Prof Rajendra Prasad, director, Vallabhbhai Chest Institute, New Delhi, said that atmospheric particulates affect human health either by allowing penetration of the lung and causing irritation to the internal membrane, or by transporting absorbed toxic gases and vapours deeper into the lung than they would normally travel. He also said that those working in mines and stone crushers are highly vulnerable for developing silicosis (lung fibrosis caused by the inhalation of dust containing silica). "People with silicosis have a 30-fold greater risk for developing TB. Exposure to dust that contains microscopic particles of crystalline silica forms scar tissue in the lungs, which reduces the lungs' ability to extract oxygen from the air. This also compromises a person's immunity and lets the TB bacteria prey on him," reveals Dr Ashutosh Dubey, government consultant for chest and lung diseases. "We have seen how patients in advanced stage of silicosis eventually die of TB, respiratory insufficiency and heart failure," says Ashish Sagar, a human rights activist working in Bundelkhand. He adds that lack of safety measures like use of sprinklers while running crushers and providing safety masks and gloves to the workers were rarely followed.

Courtesy : The Times of India