Peepli Live  is the great insult of distressed farmers of Bundelkhand :  SANJAY PANDEY

New Delhi. Peepli Live the movie which revolves around a debt ridden farmer committing suicide for the sake of compensation, trivializes this emotional issue and is "far from reality", said Sanjay Pandey, the convener of Bundelkhand Akikrit Party. 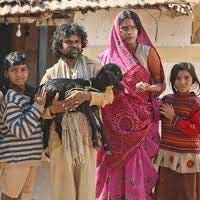 Pandey said that this film is based on the suicide cases of farmers in Bundelkhand as well as in Vidarbha during last five dry years.
Peepli Live film has shown Natha, a poor farmer from Peepli village in Bundelkhand is about to lose land due to an unpaid government loan has got a quick fix to the problem is the very same government’s program that aids the families of indebted farmers who have committed suicide and as a means of survival Farmer Natha can choose to die and futher shown that His brother is happy to push him towards this unique ‘honour’ of suicide but Natha is hesitant ,this is totally untrue too much twisted from the ground reality and insult of poor dying farmers of Bundelkhand who are the victims of wrong policies of the government. So this movie has diverted from the basic issue of farmers' suicide and hurt the sentiments of the rural folk.

"Although the film released last week has been hailed by critics as one of the smartest social satires to hit the Indian screens in years, it has not gone down well with the farming community", Pandey added. Sanjay Pandey said that these critics perhaps forgot the emotional edge of innocent farmers because maximum of critics and the members of The Censor Board of Film Certification belonging to urban areas do not know the the poverty of Bundelkhand in reality. Also the central theme of the movie is the rural urban divide. Perhaps that's why the movie has received a harshly response in the metros.

According to Sanjay Pandey, Peepli Live has made big question mark to farmers' widows who are demanding compensation after their bread earner farmer's suicide due to debt and crop failure . As this movie shows that farmers had been committing suicides for getting aid where as government had already denied these cases of suicides without even visiting house of dying family members. So Peepli Live will give strong support to such politicians and bureaucrats who never accepted these suicide cases due to starvation and debt. The film has tried to prove that farmers are not forced to kill themselves due to crises where as they themselves killing for money.

Finally Pandey said, "In the country of " JAI -JAWAN, JAI-KISAN" the two hour entertainment of cinema-lovers is not much important than the respect of 60 crore farmers. Hence the film should be baned and the censorship certificate to the film should be taken back"

yup this is right but this